Submerged in the Spirit World 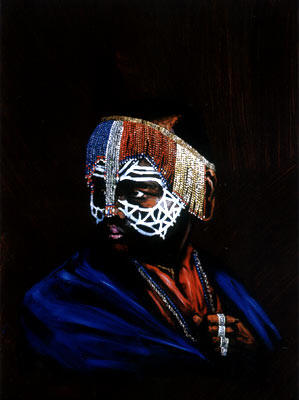 portrait of a Maasai woman

Animal and plant species are becoming extinct at a rate of thousands per day. More subtle, but equally devastating, is the disappearance of people living within primitive, indigenous cultures who have dwindled down to mere handfuls, especially in Central Africa.

Although he is not as sociologist, artist Charles Klabunde blames this on the spread of diseases like AIDS, civil wars and globalization. As well intentioned as they may be, missionaries hoping to convert these people to Western religions are slowly extinguishing these "mask societies" and their animistic beliefs.

"Monotheism has moved into places like Mali and in the process of removing the native cultures, leaves the people in a state of stress, trying to find their true identity," Mr. Klabunde says. "Islam and Christianity (forces) the indigenous people to give up their native spiritual images, which the Westerners think is just part of a pagan religion. They don't see how important these images are to the native culture, and they try to replace them with something alien.

"(Westerners) think we're civilizing these people, but some of these cultures have been in place for 5,000 years, long before the rise and reign of European civilizations. It's very sad that we're seeing an end to this reality, seeing these cultures diminish."

Mr. Klabunde, who collects primitive masks, sculpture and art, was passionate about creating a visual chronicle of the mask societies. The result is Shadows and Ceremonies, a series of 36 pencil drawings and 30 oil paintings celebrating masked dancers of Africa and Papua, New Guinea. The exhibit runs through June 23 at Beyond the Looking Glass Gallery in Frenchtown.

Along with the paintings, Mr. Klabunde has mounted ceremonial masks from his vast collection on the walls of the gallery. He also has a variety of native statues and objets d'art on display, a striking contrast to the Victorian-style gallery space and exterior of the building. It's an interesting metaphor for the contrast between the tribes he's painted and American society. 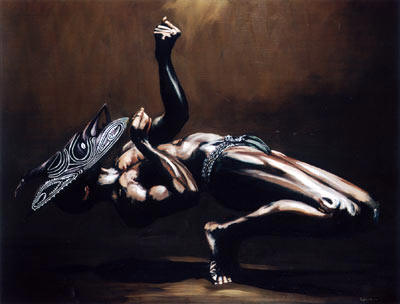 With all of our global power and influence, Mr. Klabunde sees much more meaning and expression in these primitive worlds than in all the pop culture we could export. "We have very few outlets to express ourselves," he says. "There's a small group of people â€” movie stars, politicians and television personalities â€” who speak for us, and they offer little of what's valuable. We neutralize everything in this country. Even neo-paganism is a movement that's been grafted onto our existing culture. Whatever we do, we're searching for an identity. We're missing something in our lives, becoming homogenous, pleasing everyone and consequently pleasing no one."

Mr. Klabunde believes the tribal rituals and regalia give the people tremendous, immediate connection to their spiritual beliefs. "That's what I hope to accomplish with this exhibit," he says. "That's my journey, finding and showing other people the wonderment of their world, what is being lost."

The men and women in the paintings have an iconic presence. Some stand still and look directly at the viewer. Draped in extraordinary native costumes and exuding dignity, they resemble portraits of European royalty. Others are portrayed swirling in the middle of a dance or ritual, caught in balletic poses. Mr. Klabunde used the forms of ballet dancers, magnifying their musculature.

"Looking at these paintings is not like looking at photography, it's not realism," he says. "Photography documents these indigenous societies, but it doesn't catch their essence. You don't get the dimension beyond what you see, the mystery and power. When you look at these paintings, it's an intuitive experience."

European artists such as Cezanne or Picasso saw African tribal art as a launching point to expand on their personal styles, tools to free themselves from more classical restraint. But Western artists have rarely explored the spiritual content. 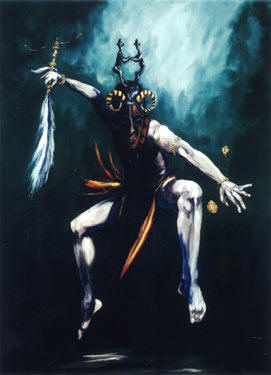 "I don't believe it's been done before," Mr. Klabunde says. "I'm elevating these figures to a very high level, epitomizing something that is ideal, trying to dignify the human being behind the mask. When we look at these paintings, we're going into the shadowy, archetypal forms which are an affirmation of ourselves. Carl Jung wrote that these archetypes are part of us all, and we still need them. However, they've become so alien to us. Society has diluted these shadow elements."

Born in Omaha, Neb., in 1935, Mr. Klabunde received his bachelor's degree from the University of Nebraska and his master's from the University of Iowa. In 1967, he moved to Greenwich Village, where he established himself as a master printmaker and painter, receiving a Guggenheim Fellowship just a few years later. His etchings are in the collections of the Metropolitan Museum of Art, the Museum of Modern Art, the National Gallery of Art and numerous national and international public and private collections, including the collection of Charles, Prince of Wales.

In the 1980s, in collaboration with the New Overlook Press, Mr. Klabunde created etchings for a deluxe edition of The Lost Ones by the late absurdist playwright Samuel Beckett. It was Mr. Klabunde's series of etchings, drawings and paintings, titled Study of the Revolutionary Mind, that got him thinking about Shadows and Ceremonies.

"It came out of this need to evaluate what's happening in the 20th century. 'A Study of the Revolutionary Mind' dealt with genocide, and that's what we're seeing in Africa. There's genocide of people and there's genocide of a culture, which is just as bad as extinction because once a culture is gone it can't be resurrected."

Although he has never traveled to Africa or New Guinea, he has visited numerous foreign countries, worked and exhibited abroad. "With modern communications, the world is very small and in some ways you don't have to travel," he says. "Unfortunately, with Africa, if you don't experience this culture now, it won't be there much longer. They won't be practicing the rituals."

The rituals themselves are profoundly deep, ethereal experiences. "When the tribesmen put on the masks, they submerge themselves into the spirit world," Mr. Klabunde says. "They become deified. It's akin to the Holy Ghost in Christianity. You're lifted into the spirit of God. You become these spirits."

As mysterious as it seems, Mr. Klabunde points out that many of us have participated in a masked ritual, shape shifting, transforming ourselves into other beings. We do this every Halloween.

"People change when they put on a mask," he says. "It's part of our ingrained society. It's in the subconscious. We can't totally comprehend it."